A 57-year-old woman who was seriously injured when an overhead sign fell and crushed her car on the Tullamarine Freeway last year has launched a major Supreme Court action against VicRoads, Transurban and CPB Contractors.

Lawyers acting for Nella Lettieri have alleged that a series of failings by the three defendants caused the accident in January 2019, which left her with significant physical injuries and psychological trauma. 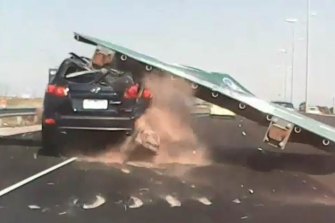 An image from dashcam footage showing the sign after it fell on the Tullamarine Freeway.Credit:Nine News

The four-tonne sign landed on the road then crashed back onto Ms Lettieri's car, crushing the front of her vehicle as she approached Essendon Airport.

Ten allegations of negligence are claimed against VicRoads and Transurban in a writ filed on November 17, including failing to maintain or inspect roadway signage.

CPB Contractors, which was responsible for the construction and installation of signage on the Tullamarine Freeway, is also accused of repeated negligence, including failing to adequately design, construct and install the signage, according to the writ.

Ms Lettieri suffered head and spinal injuries along with post-traumatic stress disorder from the crash, which she described at the time as "like a roller door slamming shut in front of me". 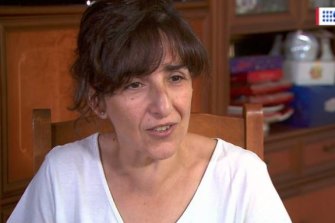 The Transport Accident Commission had recently issued Ms Lettieri with a serious injury certificate, according to her lawyer, John Karantzis from Carbone Lawyers.

"Our client continues to suffer from severe physical and psychological injuries as a result of this incident and we intend to hold those responsible for these injuries to account," Mr Karantzis said.

The incident prompted an investigation by CPB Contractors, which is part of the multinational CIMIC Group, formerly known as Leighton Holdings.

The review found the sign collapsed because of a "progressive fatigue crack" due to the omission of a stiffener plate during the fabrication process.

CPB Contractors declined to comment on the legal proceedings when contacted by The Sunday Age on Thursday.

A Department of Transport spokeswoman said it had conducted a thorough audit of similar signs and was confident the Tullamarine Freeway accident was an isolated incident.

"As this matter is now the subject of legal proceedings, we are unable to comment further," the spokeswoman said.

Major Projects Victoria program director David Clements said it had undertaken an extensive review and site inspection of all overhead and roadside assets built by CPB Contractors as part of the CityLink Tulla Widening Project.

"These inspections did not identify any ongoing public safety concerns and we remain committed to working with government and industry to ensure this doesn’t happen again," Mr Clements said.

Our Morning Edition newsletter is a curated guide to the most important and interesting stories, analysis and insights. Sign up here.