A top Facebook Australia official says it may be inconsistent with democratic values if the platform removed advertising by politicians that contained false information, saying the social media company was not the "arbiter of truth".

Facebook executives fronted a Victorian parliamentary committee on Thursday and argued the US firm should not be held liable for receiving money from political actors who made deceptive claims on its social media platform during election campaigns. 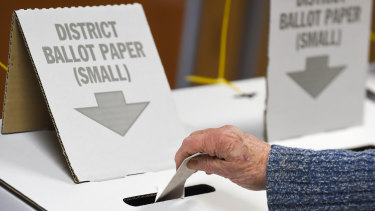 The parliamentary inquiry is considering the role of social media in Victorian elections.Credit:Justin McManus

The inquiry, which is examining reforms to stem online misinformation and ban false political ads, questioned local Facebook officials about whether the company had sufficient measures in place to counter nefarious political actors.

The committee may recommend that government legislate "truth in advertising" laws that could result in fines worth tens of thousands of dollars for politicians or groups publishing election ads containing false information. The laws could apply to social media companies if the platforms could reasonably have been expected to know the political advertisement was misleading or deceptive.

"We have seen examples of political ads in Australia where … people don't necessarily make a claim that is verifiable. It's not possible to say whether it is true or false but they may be expressing an opinion or they may be posing a question," he said.

"I think there is some debate about whether the best public policy outcome is to remove content that makes a false claim in a political ad or whether it should be made available to encourage scrutiny, debate and accountability.

"In a democracy, the general principle is to encourage debate and discussion … of the claims that people make and to only remove particular claims or pieces of content if they are inherently harmful."

Mr Machin, who said Facebook had invested significant resources on election integrity measures in recent years, said any truth in advertising laws in Victoria should not establish an onus on Facebook to determine whether the claims expressed in an ad were true.

"Facebook doesn't want to be the arbiter of truth when it comes to claims by political actors," he said.

"Not just because of some of the practical difficulties there, but because we do question whether that would be a good outcome for democracy in Australia for a privately owned US company to have that level of power in a political debate."

Mr Machin suggested an independent decision-maker could police the advertising laws. He said there would need to be avenues for appeal to ensure governments did not abuse the scheme.

In South Australia, where similar laws have existed since 1985, the electoral commissioner adjudicates on whether ads make false claims. The Victorian Electoral Commissioner told the inquiry on Tuesday he did not want the VEC policing any such laws.

The state Labor Party, Victoria's peak union body and the Centre for Public Integrity have welcomed truth laws being examined. Radio and TV industry bodies are less enthusiastic and say political parties, not broadcasters, should be liable for misleading advertisements. The Liberal Party cautioned against the laws.

The ACT government this year banned false political advertising. Politicians in the territory were motivated by two recent federal election issues – Labor's "Mediscare" campaign and the Coalition's "death tax" warning – that are widely accepted to be untrue or, at best, misleading.

The committee, chaired by Labor MP Lee Tarlamis, may recommend in a report to the government that laws to ban misleading advertising in Victoria be drafted. Draft laws have not yet been proposed.

Mr Machin said Facebook had established a library of political advertisements in Australia that logged each political ad, who authorised it and how much it cost. The recent Queensland election was the first election where the library had been accessible.

"We believe that more needs to be done," he said, flagging the introduction of additional integrity measures before the 2022 Victorian election.

"We do see election integrity as a continuing challenge … and we have an ongoing commitment in this are."

Our Morning Edition newsletter is a curated guide to the most important and interesting stories, analysis and insights. Sign up to The Sydney Morning Herald’s newsletter here, The Age’s here, Brisbane Times’ here, and WAtoday’s here.