Save articles for later

Add articles to your saved list and come back to them any time.

New York: Governors and public health officials across the United States are pleading with Americans to change their behaviour and prepare for a long winter as the country shatters record after record for coronavirus cases and hospitalisations. 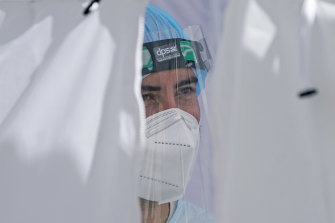 New York Governor Andrew Cuomo tweeted on Saturday morning: "One in every 378 Americans tested positive for COVID over the past week. Wear a mask." Cuomo's math is on target: In a population of 330 million, 894,819 people, or 1 in 378, tested positive since last Saturday.

The virus has killed more than 1000 Americans a day in the past week, a toll that would shock the nation, were it not for the fact that twice as many people were dying daily during a stretch in April, when doctors knew less about how to treat COVID-19, the illness caused by the virus.

North Dakota also hit a single-day record on Saturday, announcing 2270 new cases. In a reversal, the state's governor, Doug Burgum, announced several measures late on Friday, including a mask mandate, a limit on indoor dining of 50 per cent capacity or 150 people and a suspension of high school winter sports and extracurricular activities until December 14.

In New Mexico on Friday, Governor Michelle Lujan Grisham announced the nation's most sweeping statewide measure of the fall season, issuing a two-week "stay at home" order to begin Monday.

Governor Kate Brown of Oregon issued orders Friday to place the state in a partial lockdown for two weeks, shuttering gyms, halting restaurant dining and mandating that social gatherings have no more than six people.

In Europe, Austria has announced it will join many of its west European neighbours in entering national lockdown to bring its soaring coronavirus infections under control.

In the past month, the government had used a lighter touch in dealing with the second wave of coronavirus cases than the first. A nighttime curfew was in place from 8pm to 6am, but shops were open, and bars and restaurants were limited to take-away service. 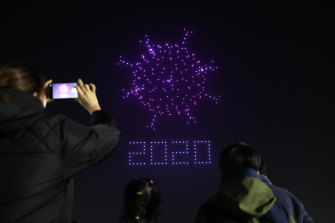 Drones fly over the Olympic Park make the shape of coronavirus to send messages to support the country and share measures to contain the spread of the coronavirus in Seoul, South Korea. Credit:Getty Images

Meanwhile, thousands of elderly Spaniards are taking the vengeful step of disinheriting their children if they have shown no regard for their well-being during this year's lockdown.

According to Spanish support networks for the elderly, many older people have been so heartbroken by the lack of contact from relatives during the pandemic that they are seeking advice on how to cut them out of their will. 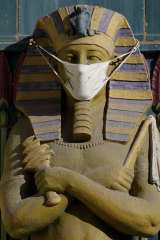 A sculpture wears a mask outside of a store during the COVID-19 pandemic in Chicago. Chicago mayor Lori Lightfoot urged residents in the nation’s third-largest city to restrict social gatherings to 10 people, part of a renewed push announced Thursday to fight a COVID-19 surge.Credit:AP

"Our motto is 'if they don't look after you, don't leave them anything'," Marcel Cornellá, who runs an association for the elderly in the Madrid suburb of Fuenlabrada, told the London Telegraph.

Cornellá added that he has been receiving 220 calls a month from elderly people asking for advice on how to disinherit a child or children, five times more than pre-pandemic levels.

"Typically, this is a problem that was already there, and now it has come to the surface as people suffer confinement and health problems," said Cornellá, citing the example of an 81-year-old widow who had no contact from her daughter for 18 months despite suffering from terminal cancer.

"This law of forced inheritance is from the time of horse and carts, and has nothing to do with today's world. People should be free to choose what they wish to do with their property," he added.

In Spain only Navarre and the Basque Country regions make it easy for -parents to disinherit offspring. Elsewhere, the law says parents must demonstrate cause, such as physical abuse.

"Fortunately, judges are interpreting the law more kindly, and we have rulings now where the psychological suffering caused by a complete lack of contact is being equated to mistreatment," said Madrid lawyer Francisco Rubiales. "With COVID this problem has exploded. I am getting up to 500 calls a month, but less than 10 per cent go through with the whole process," Rubiales added.

Conrado Alegre, a 64-year-old former factory worker in early retirement due to ill health, is determined to launch the legal process to cut off his two daughters, whom he has only seen in court in the past 20 years after a -fractious divorce and a series of -disputes over finances.

"I don't consider them my daughters any more. The last thing I want in this world is for them to enjoy a single cent of what I have earned," he said.

"They caused me more pain than anyone else, and even sadder is the fact that my parents lost the only grandchildren they had," he added.

The New York Times, with Reuters; The Telegraph, London, AP

Most Viewed in World