The death toll from Hurricane Iota continues to rise after the storm hammered a part of Central America that was recently battered by Hurricane Eta.

Iota left a trail of devastation in its wake as it tore across parts of Nicaragua and Honduras earlier this week. The storm made landfall as a Category 4 hurricane on Nicaragua’s northeastern coast late Monday, hitting almost exactly the same stretch of the Caribbean coast that was devastated by Hurricane Eta two weeks ago.

Nicaragua Vice President and first lady Rosario Murillo on Wednesday raised the nation's death toll to 16. The victims were spread across the country, swept away by swollen rivers or buried in landslides.

Rescuers searched at the site of a landslide in northern Nicaragua, where the local government confirmed four deaths and neighbors spoke of at least 16. 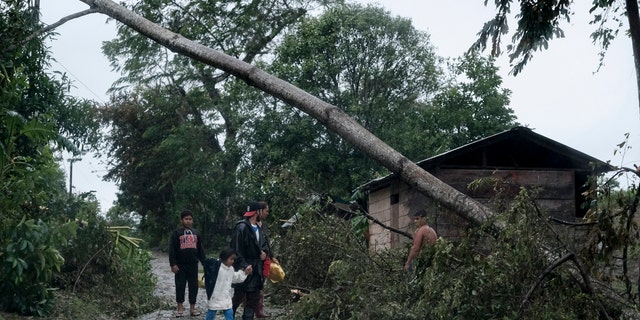 A fallen tree lies on the road after the passage of Hurricane Iota in Siuna, Nicaragua, Tuesday, Nov. 17, 2020. Hurricane Iota tore across Nicaragua on Tuesday, hours after roaring ashore as a Category 4 storm along almost exactly the same stretch of the Caribbean coast that was recently devastated by an equally powerful hurricane.
(AP Photo/Carlos Herrera)

On Wednesday, CD-SINAPRED, which is Nicaragua’s emergency management agency, tweeted footage of the area where the landslide occurred at Macizo de Peñas Blancas, a mountain in Matagalpa province.

There were seven confirmed dead at the mountain, and the search continued, Murillo said.

Nicaragua’s army said it was sending 100 rescuers to the site. Access was complicated by downed trees blocking roads.

Monsignor Rolando José Alvarez, the Roman Catholic bishop of Matagalpa, tweeted Wednesday that priests are being sent to the Macizo de Peñas Blancas.

“At this moment our priests are mobilizing to that area and we are making ourselves available to all who are affected,” he wrote, in a translated tweet.

On Wednesday, the National Hurricane Center said the storm was dissipating over Central America but warned that a threat from heavy rains continues.

Aid organizations have warned that Iota could spark a humanitarian crisis in the storm-ravaged region.

On Wednesday CD-SINAPRED tweeted images of the disaster relief group COMUPRED in the Boaco area helping families affected by the heavy rains.

The Associated Press contributed to this report.