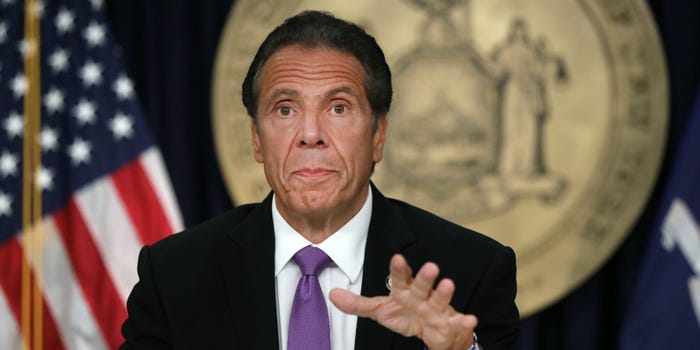 Speaking from a pulpit during a Sunday church service in Manhattan, Cuomo said the state will move to sue if Trump withholds access to New Yorkers of a possible forthcoming vaccine. His remarks come after the president took to Twitter on Friday to express his intent to delay immunization in New York following Cuomo's continued criticism of the plan and call for a state-level review board of the process.

"I tell you today, if the Trump administration does not change this plan and does not provide an equitable vaccine process, we will enforce our legal rights," Cuomo said, as first reported by the New York Post. "We will bring legal action to protect New Yorkers. I'm not going to allow New Yorkers to be bullied or abused."

Cuomo has been an outspoken opponent of Operation Warp Speed since it was announced in September. In October, he announced plans to convene his own group of experts to review distribution procedures in New York, stating at the time that the state is "going to need someone other than this FDA and this CDC saying it's safe."

The governor has been vocal about lack of accessibility to minority groups within the plan, which calls for use of existing heath care infrastructure that administers vaccines through hospitals and other private providers. As a result, it will be more difficult for individuals without insurance — who are disproportionately people of color, a demographic that has been among the hardest hit by the virus — to access vaccinations.

On Sunday, Cuomo said that New York "will mobilize an army to vaccinate all New Yorkers fair and equitably," but "we can't compound the racial injustice that COVID already created," according to the Post. The governor has also teamed up with the NAACP and the National Urban League on the effort and said both organizations plan to participate in potential legal action.

"Don't tell us it's the state's responsibility without giving the state the resources to do the job,'' Cuomo said. "President Trump must learn the lesson: Stop the abuse. Stop the division. Stop the anger. Stop the hatred. Stop the narcissism. And spend your last months trying to help people and repair the damage you have done."