A coronial inquest into Bourke Street rampage has delivered a withering assessment of Victoria Police's handling of the incident, paving the way for a multi-million dollar civil claim from families of the victims.

The damning findings handed down on Thursday by Coroner Jacqui Hawkins identified a string of police failures and "systemic deficiencies" in the hours and minutes before James Gargasoulas' massacre in 2017. 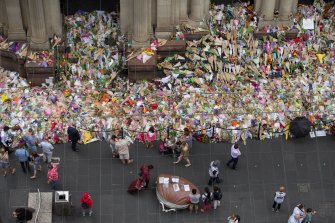 The makeshift floral tribute to the Bourke Street victims on January 30, 2017.Credit:Jason South

Ms Hawkins made nine recommendations after the six-week inquest into the deadly rampage, prompting calls from relatives of the victims for a comprehensive overhaul of police policy and culture.

The coroner said attempts to negotiate with Gargasoulas amounted to "nothing more than two phone calls and bizarre text messages".

"The strategy never had a chance to succeed," she said. "How could it when the person they were trying to negotiate with was a … delusional offender fixated on taunting police?"

Gargasoulas, who is serving life in prison with a non-parole period of 46 years, killed six and injured dozens more when he sped through the heart of Melbourne's CBD in a stolen maroon Holden Commodore on January 20, 2017.

Melinda Tan, widow of Matthew Si, said she felt no one had ever accepted any responsibility for their part in events on that day or the lead up to it but hoped Victoria Police Commissioner Shane Patton would listen to the victims’ voices so that their loved ones had not been "sacrificed in vain".

"We place our trust in Victoria Police to protect our lives and take decisive action in the face of danger," Ms Tan said.

Ms Hawkins found poor planning, a lack of assertive leadership and command control, a lack of adequate resources, inadequate communication on police radios, inflexible policies and misguided attempts to negotiate with Gargasoulas created a "perfect storm" that allowed him to evade arrest for more than 12 hours. 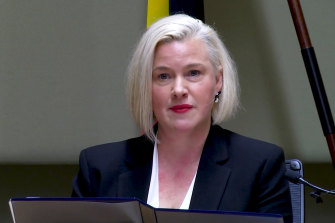 However, she was unable to conclude that the catastrophic attack, which "struck at the very heart of Melbourne", could have been averted.

"It is agonising that, despite the escalating events of the previous days and the scores of police members actively engaged in attempting to stop him, such a violent, drug-fuelled, psychotic and delusional criminal was able to slip through the cracks and evade interception by police over several hours," she said.

Ms Hawkins also found "objective and strategic" thinking by officers was absent on the day of the attack and there was a lack of assertive leadership from senior detectives in the hours leading up the massacre.

"While I am unable to say whether the offender would have been located and arrested had a planned strategy been in place, the failure to develop such a plan and the lack of a co-ordinated response meant that this opportunity was lost," Ms Hawkins said.

The inquest also "starkly exposed" the difficulties in stopping a vehicle-borne attack, she said, and once Gargasoulas reached Swanston Street and then turned into Bourke Street "there was nothing further the operational police could have done” to safely stop his vehicle.

Police began searching for Gargasoulas at 2.20am on January 20, 2017, about an hour after he stabbed his brother, Angelo, multiple times in the face, neck and chest outside a housing commission flat in Windsor.

The wanted man had been on a two-month crime spree after returning from South Australia and eluded police – who at times were following him from the road and sky – for 11 hours that day before he careered down Bourke Street at 1.30pm. He was shot and arrested at the scene.

In her findings, Ms Hawkins was highly critical of officers who failed to call their chase a "pursuit", saying it highlighted the challenges of police "losing perspective in the heat of the moment".

Had a pursuit been called, as Gargasoulas crossed into different police divisions, there was no doubt a "pursuit controller" would have been deployed, she added.

"This meant that no one had responsibility."

During the inquest it was revealed bail justice Christos Pantelios had released Gargasoulas on bail six days before the massacre and as part of her findings, Ms Hawkins delivered a withering assessment of his testimony.

"His evidence suggested that his memory of the identity and detail of other documentary material before him during the bail hearings was practically non-existent."

Ms Hawkins nine recommendations include further training for police in hostile vehicle attacks; a review of Victoria Police's training, policies and procedures on bail and remand with respect to high-risk, recidivist offenders; a review of co-ordination policies between different police units; and a review of critical incident communication procedures, particularly where the use of a dedicated radio channel is appropriate.

In a statement, the families of those killed urged Victoria Police to adopt all nine recommendations.

But some feared a disconnect between serving members of the force and senior command remained.

"It is imperative that Victoria Police see this inquest as a catalyst for real, meaningful cultural change within the force, lest this investigation be added to the list of opportunities missed," they said.

In response to the findings, Mr Patton admitted "operational shortcomings" in Victoria Police had occurred in the hunt for Gargasoulas but backed the actions of his officers who he believes all acted in good faith.

He said changes had now been made to how police manage high-risk offender arrests with investigators no longer left "holding the ball". Instead, he said, more senior officers – potentially as senior as assistant commissioner – would be called in to oversee an arrest plan.

Police Association secretary Wayne Gatt said the findings provided an account of the difficulties and complexities that confront police.