Crown will open a Sky Deck near the top of its 271-metre tower in Sydney early next year, despite evidence before a regulator's inquiry casting doubt over the future of its high-roller casino.

The NSW gambling regulator on Wednesday blocked the James Packer-backed casino giant from opening VIP gaming floors at its nearly completed skyscraper in Barangaroo until an inquiry into its licence is completed in February. 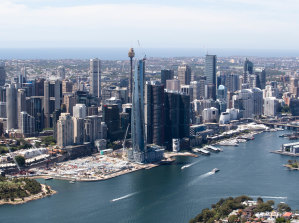 It has laid to waste Crown's plans to open its VIP gambling floors in December. The company said it would "focus on opening the non-gaming operations at Crown Sydney", which include a 350-room hotel and a dining precinct.

Crown filed a management plan for the public Sky Deck observation area on level 66 of the building, which the NSW Department of Planning, Industry and Environment approved this month. It is scheduled to open in March.

When the tower at Barangaroo South was approved by the former Planning Assessment Commission in 2016, an observation area on the upper floors that was accessible to the public free of charge was a condition of approval. 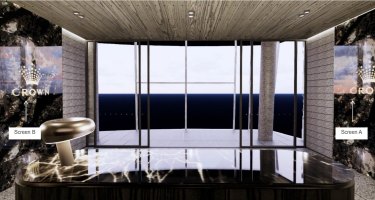 A slide show presentation that was part of Crown's management plan for the observation deck says 15 people would have access to the area during each of the seven free tours that are expected to be run daily.

Visitors will take the lift to the building's 66th floor before watching a two- to three-minute video about the history of the land and site at Barangaroo, as well as the design, structure and construction of the building.

"At the end of the video, the curtain [sectioning off the main area of the deck] will automatically open and guests can access the open balcony to observe the views," the proposal says.

The deck will have a "panoramic" outlook that provides "180-degree views of Sydney's breathtaking skyline". 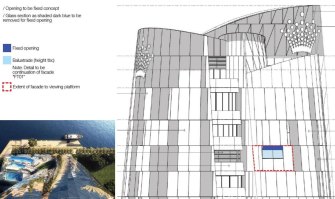 The viewing platform will take up a portion of level 66 inside the 75-storey tower.

The Sky Deck will be at a height of about 250 metres, which is nearly the same height as the main observation deck at the city's tallest structure, Sydney Tower, which has a 268-metre high outdoor viewing platform.

A spokeswoman for Crown said its viewing deck was scheduled to open by March 1.

"The public can attend the experience at no cost, guests will register via [an] online booking portal," she said.

The department said the proposed deck met the approval conditions for the project because it was open to the public, included provision for a queuing area in the building's lobby and had been prepared in consultation with the Museum of Applied Arts and Sciences-run Sydney Observatory at nearby Observatory Hill.

Staff at the observatory had expressed concerns that light spill from Crown’s tower would limit viewing of the night sky, including a sphere-like cluster of stars known as Omega Centauri, for part of the year.

A spokeswoman for the Department of Planning, Industry and Environment said Crown had advised it would submit the development's final lighting and light-spill report to the department for endorsement shortly.

On Wednesday, the chairman of the Independent Liquor and Gaming Authority, Philip Crawford, said he was uncomfortable with Crown opening gaming operations until the Bergin inquiry into its licence was completed.

Mr Crawford was disappointed Crown was "not picking up the vibe" and had not delayed the Sydney opening itself. Revelations about money laundering at Crown's Melbourne and Perth casinos were the ILGA's greatest concern.

The use of the accounts to bank criminal funds was first exposed by The Age and The Sydney Morning Herald last year as part of a series of reports that triggered the ILGA inquiry.

Catch all the day’s breaking news

At the end of each day, we’ll send you the most important breaking news headlines, evening entertainment ideas and a long read to enjoy.  Sign up here.