This is the adorable moment an 11-week old baby chimp laughs for the first time while getting a tickle from her zookeeper carers at Maryland Zoo.

Baby chimp Maisie was born at the Oklahoma City Zoo in late August  but moved to Maryland Zoo to be hand-reared after her birth mum rejected motherhood.

Exactly like a human baby, Maisie is  playing with toys and learning to interact.

The cute footage that was filmed at The Maryland Zoo in Baltimore on November 3 shows Maisie playing with human baby toys and giggling with a wide grin at carers, who give her a tickle under her arms.

She is due to be paired with a surrogate chimp mum – but for now is being given round the clock care by zoo keepers.

The Chimp Forest Animal Care team work in three shifts around the clock to provide her constant care. 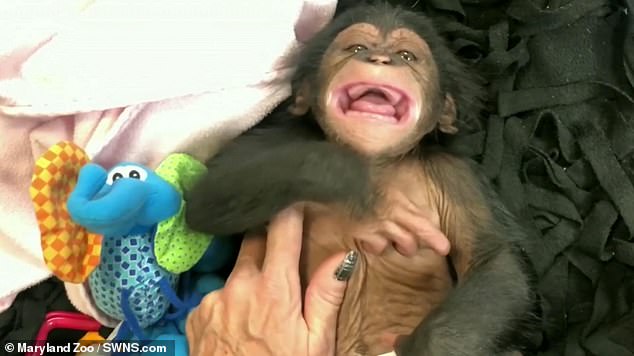 ‘We also wear a shirt and blanket that have fringe material sewn on that helps her learn to grip.’ 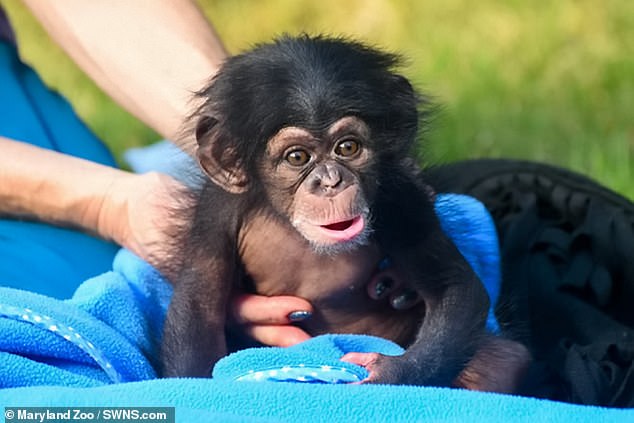 Like humans, chimps are highly social animals, care for their offspring for years and can live to be over 50.

Although they normally walk on all fours they can also stand and walk upright.

They are classed as an endangered species as they have already disappeared completely from four countries.

Research has shown that chimpazees learn at the same rate as humans – gross motor skills begin to emerge at around four months, communication traits at 12 months, social interaction skills at 14 months and fine motor skills at 15 months.