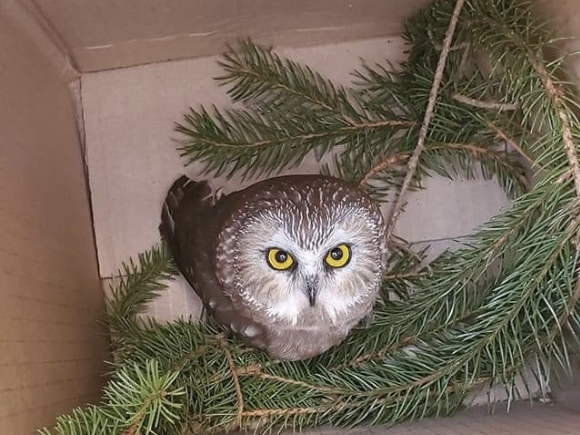 A man who was decorating this year's Rockefeller Center Christmas tree in Manhattan made a wild discovery over the weekend when he spotted a small owl tucked away in some of its branches.

The owl, which has been identified as a northern saw-whet owl had made a three-hour trek to the city from Oneonta, New York,  Ellen Kalish, who owns Ravensbeard Wildlife Center, told Insider.

When the man attempted to remove the bird from the 75-foot Norway spruce, it wouldn't leave on his own.

"The guy that works on Christmas tree, found the owl and called his wife and said 'the owl's not flying away, we need to get some help,'" Kalish told Insider shortly before taking the bird to the vet on Wednesday.

The man's wife got in touch with Kalish, whose center has been in business for 20 years, and she agreed to take the owl in for rehabilitation.

Kalish said that considering the journey the bird — which is now named Rockefeller — made to the city, he's doing very well.

"We fed him and gave him fluids," Kalish said. "He seems to be in great shape. We'll know better when we get x-rays from the veterinarian, but right now I'm hopeful that he'll be released shortly."

Saw-whets are fairly common in North American forests, according to The Audubon Network.

Kalish said that she has one or two come to her center every year.

Currently, the Ravensbeard center in Saugerties, New York, has about 20 hawks and owls in residence, Kalish said.

The center, which is funded by donations, feeds the birds frozen rodents.

The Rockefeller Center tree, which the owl temporarily called home, is about 70- to 80-years-old. It was donated to the center by Al Dick, the owner of Daddy Al's General Store in Oneonta, and will be lit on December 2, according to the New York Post.