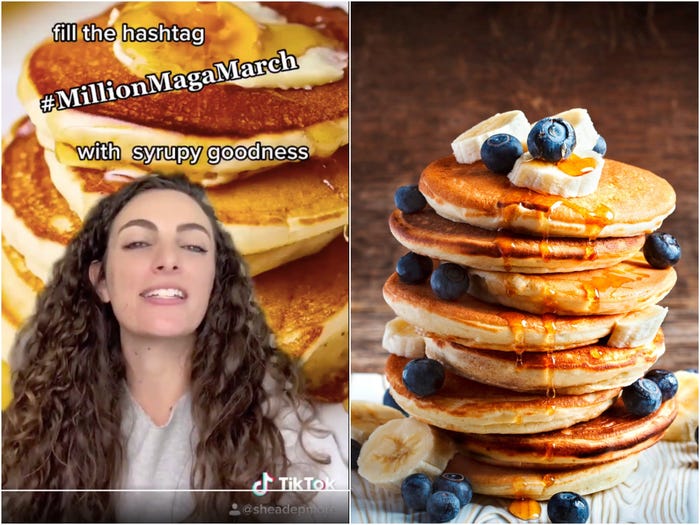 K-pop fans are using the #MillionMAGAMarch hashtag to post pictures of pancakes in protest of the pro-Trump rally taking place on Saturday afternoon.

Actor Shea Depmore urged her followers on Twitter and TikTok to post the pictures of pancakes, instead of counter-protesting in person at the Million MAGA March, due to take place in Washington, DC.

"Proud Boys and mega-mad MAGAers are descending upon D.C this Saturday for the Million MAGA March. I've seen many on this app rightfully warn people to stay away, as these fools come strapped and they're angry," Depmore said in a video posted to Twitter and TikTok on November 12. "But I don't want these Proud Boys to be proud."

She added: "Make yourself some pancakes or find yourself a good stock photo and fill the hashtag #MillionMAGAMarch with syrupy goodness. Someone please inform the K-pop stans."

K-pop fans honored the request on Saturday, with countless photos of pancakes later flooding the hashtag.

"Shout out to the incredible K-Pop Stans (Twitter royalty) who hijacked the #MillionMAGAMarch hashtag with pancakes making it unusable by Trump loyalists," one person wrote on Twitter.

One person appeared to use the hashtag to demonstrate President Trump's defeat in the election, posting a picture of pancakes falling down with the caption: "A presidential story, illustrated using pancakes."

"There's nothing that flips better than a pancake —  except ya know…maybe Georgia, Arizona, Pennsylvania, Michigan, and Wisconsin," another wrote.

However, some Twitter users had reservations over taking part, with one writing: "Seriously, though, if the MAGA folks want to march, let them march. They have First Amendment rights like everyone else does. Ignore them and leave them alone."

"Those of us who oppose Trump already expressed our sentiments in the way that matters most. We voted. #MillionMAGAMarch," they added.

The Million MAGA March could be the largest gathering of far-right and white nationalist groups since the "Unite the Right" rally in 2017, according to Yahoo.

The event is likely to be attended by campaigners who believe the president's claim that election fraud led president-elect Joe Biden to win the US general election.

A video posted on Twitter on Friday showes Trump supporters have already started gathering for the event.

This isn't the first time K-pop fans have led efforts to drown out a hashtag in order to fight for what they believe in.

In June, the fandom protested racist posts by using the hashtags #whitelivesmatter, #whiteoutwednesday, and #BlueLivesMatter to post fancams and other memes.

Earlier this year, fans of the K-pop girl group Blackpink discouraged others in the fandom from using their own hashtags and instead asked them to use #BlackLivesMatter in order to pay respect to George Floyd.