Teresa Giudice’s four daughters are watching their mom step out with a new boyfriend two months after divorcing their dad Joe. We have how the girls feel about Louie Ruelas.

Real Housewives of New Jersey star Teresa Giudice let fans in on a huge secret on Nov. 9 — she’s got a new boyfriend! The 48-year-old shared a photo to her Facebook account, introducing the world to handsome businessman Louie Ruelas, 46. The icing on the cake is that the 48-year-old’s four daughters by ex-husband Joe Giudice — Gia, 19, Gabriella, 16, Milania, 15 and Audriana, 11 — have already given Louie their seal of approval.

“Everyone is really happy for Teresa, her daughters included. Her girls have met him and like him and so has the rest of her family. They all want to see Teresa happy and this guy is making her happy so they approve,” a RHONJ source tells HollywoodLife.com EXCLUSIVELY. 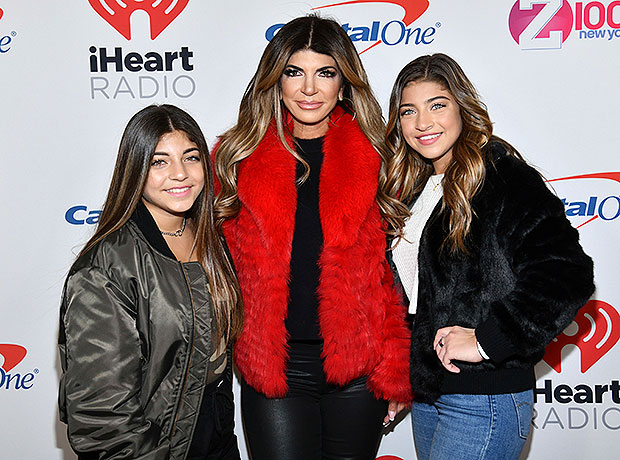 The news of Teresa entering into a new romance comes nearly a year after she split from husband of 20 years Joe, 48, and two months after their divorce was finalized in Sept. 2020. “She did take her time before going public, just to make sure she was serious. But now that the news is out you can expect to see a lot more of him,” our insider continues.

Teresa shared a FB photo on Mon. Nov. 9 showing the couple from behind, with Louie placing is hand lovingly on Tre’s tush. She wore tight black jeans in the photo, while her man’s muscular physique could be seen though his black and gold t-shirt. Teresa simply wrote,”excited to reveal my new boyfriend” and added a red heart emoji.

Tre’s ex-husband Joe is totally fine with the Bravo star seeing a new man….because he’s already dating as well! Joe has been living in Italy since Oct. 2019, moving there to get out of a U.S. I.C.E. detention facility while he continues to appeal his deportation order following his prison stint for bankruptcy fraud.

In an Oct. 2020 virtual appearance on The Wendy Williams Show, Joe revealed that he’s “actually seeing a lawyer,” adding that “We’ve been seeing each other you know what I mean.” But he later clarified “I wouldn’t say she’s my girlfriend, but we’re hanging out together.” Teresa has taken things a step further by actually calling Louie her boyfriend.